Ensure your content is up to date without disrupting users progression.

Written by Odi
Updated over a week ago

Versioning control is here, offering you more visibility of any changes made to content.

Admins can now determine if in-progress learners have to start from scratch or continue by publishing with or without reset. Let's use the below scenario as an example. Let's say a user completed a quiz resource earlier today: 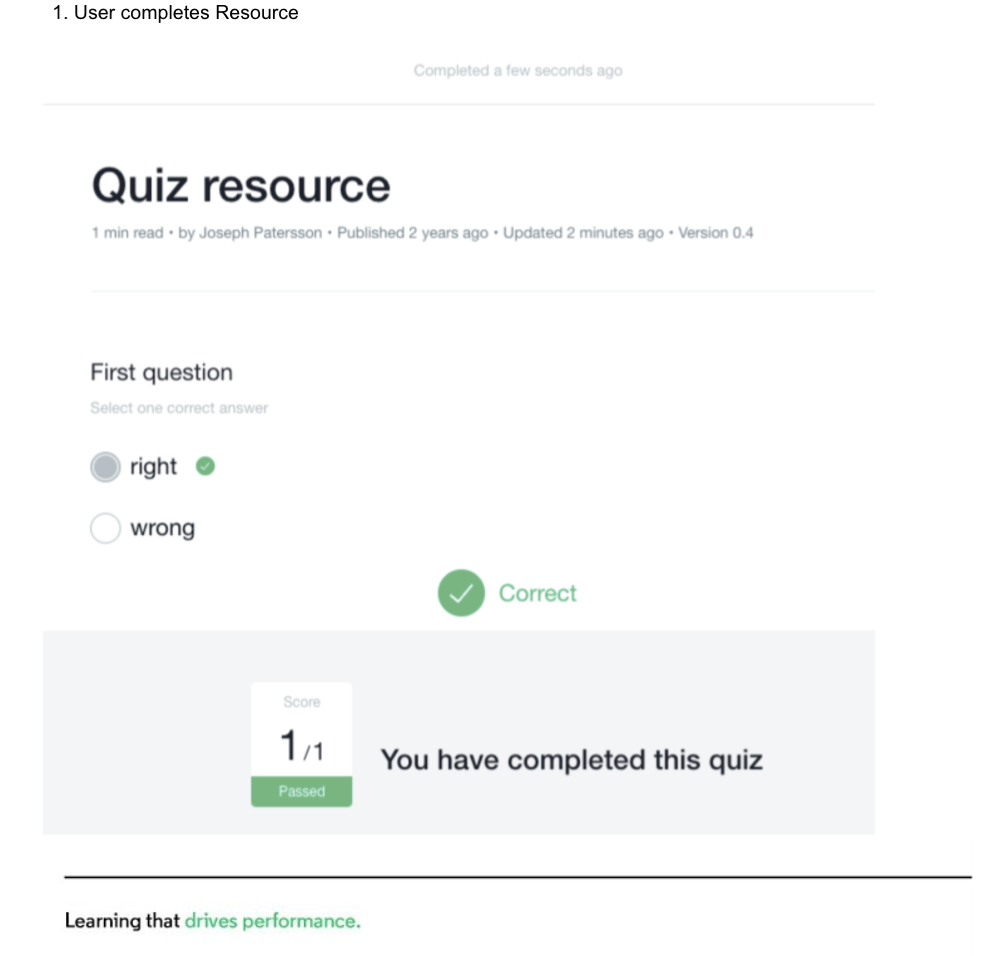 An administrator then adds a new question and publishes the new version without resetting the enrolments for the user. The user then goes back into the resource later that day: 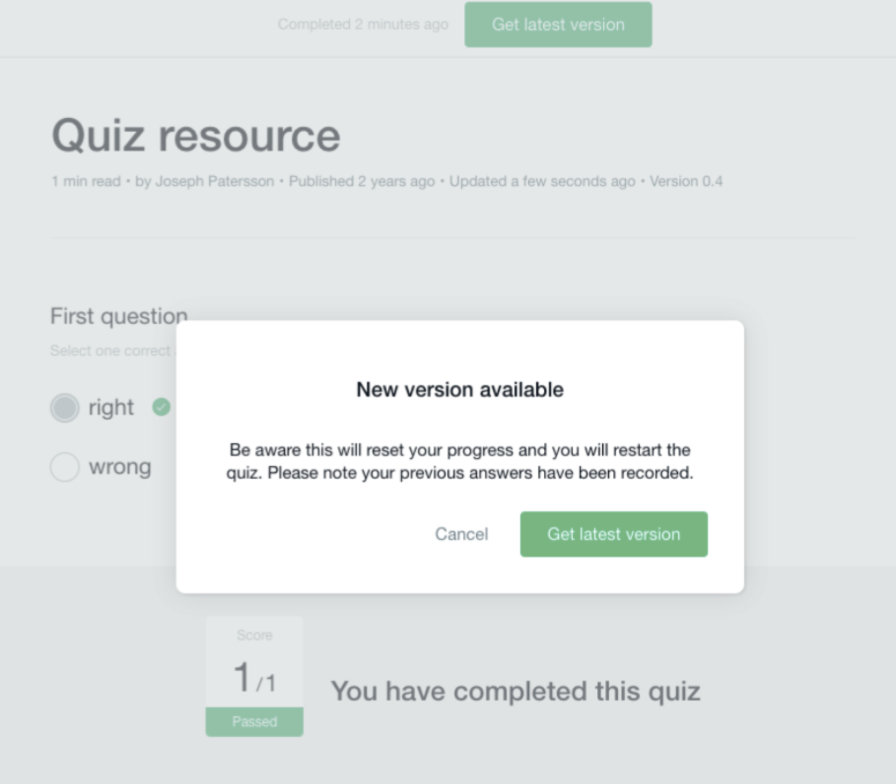 The user has the option of getting the latest version or clicking cancel to remain in the previous version.

Please note: this action is only visible for completed quiz resources.

In other cases such as in-progress resources or completed text element resources, the resource version of the new enrolment is created automatically. Let's look at how that works below. Say a user has a resource in progress that consists of two questions: 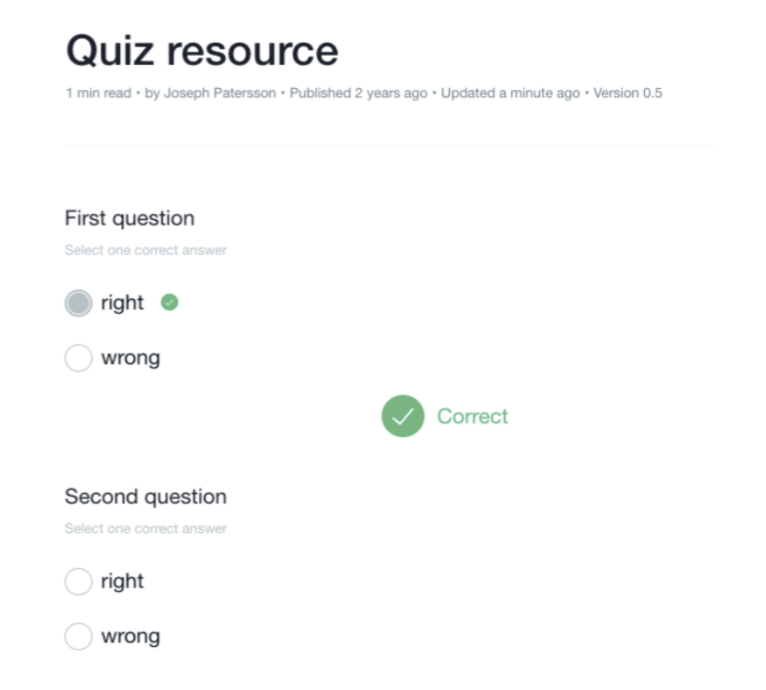 You then add a third question and publish the new version without reset. The user will still see their previously answered question and only has to answer any new questions that have been added: 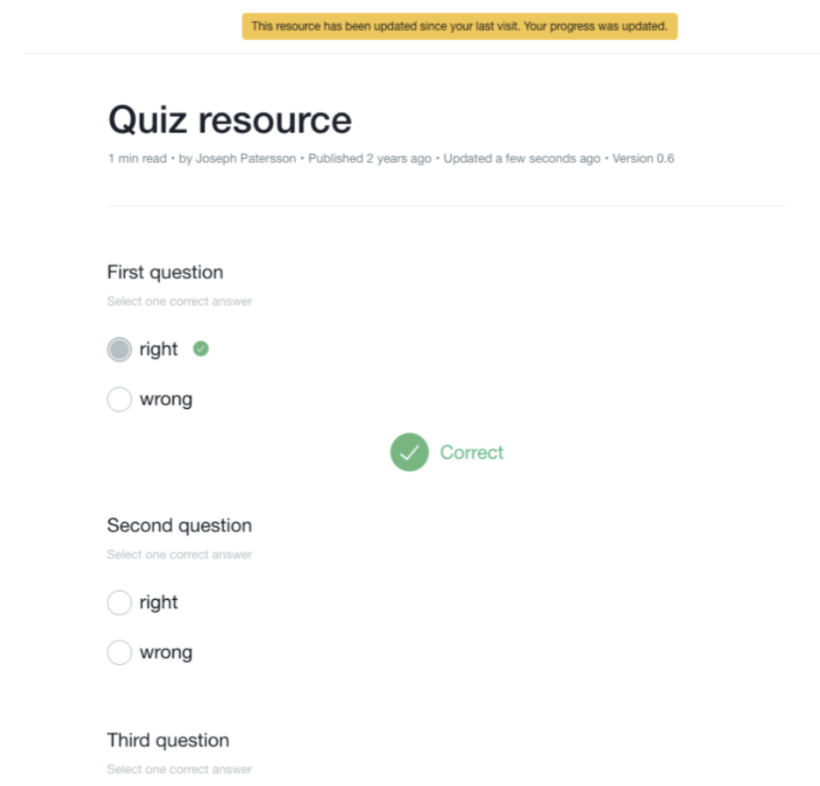 There is no impact on pathway progress if a user self-enrols into a later version of a resource or if a new resource has been added. Let's take the scenario below as an example. A user has completed a pathway and goes back into it: 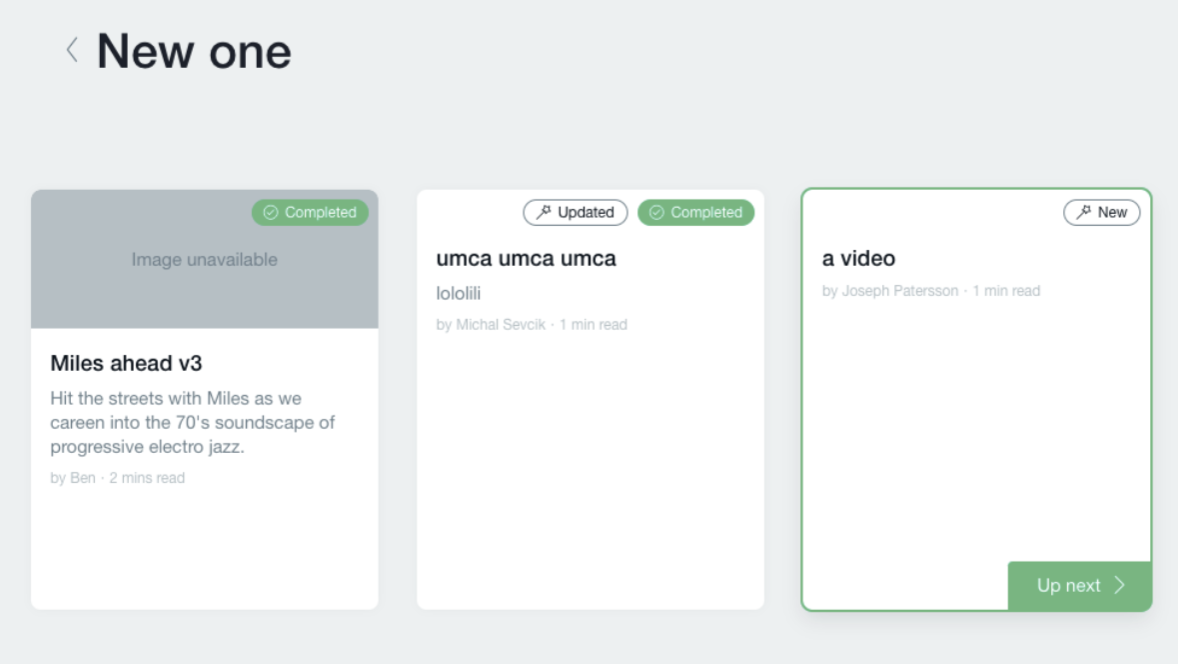 As you can see, the 'a video' resource has a 'New' label, which indicates that this resource was added after pathway enrolment was completed.

The 'Updated' label on the middle resource indicates that there is new version of the resource available after it was completed.

The user can choose to go back into an updated resource and complete the latest version. Their previous completion records will still be shown in analytics as below: 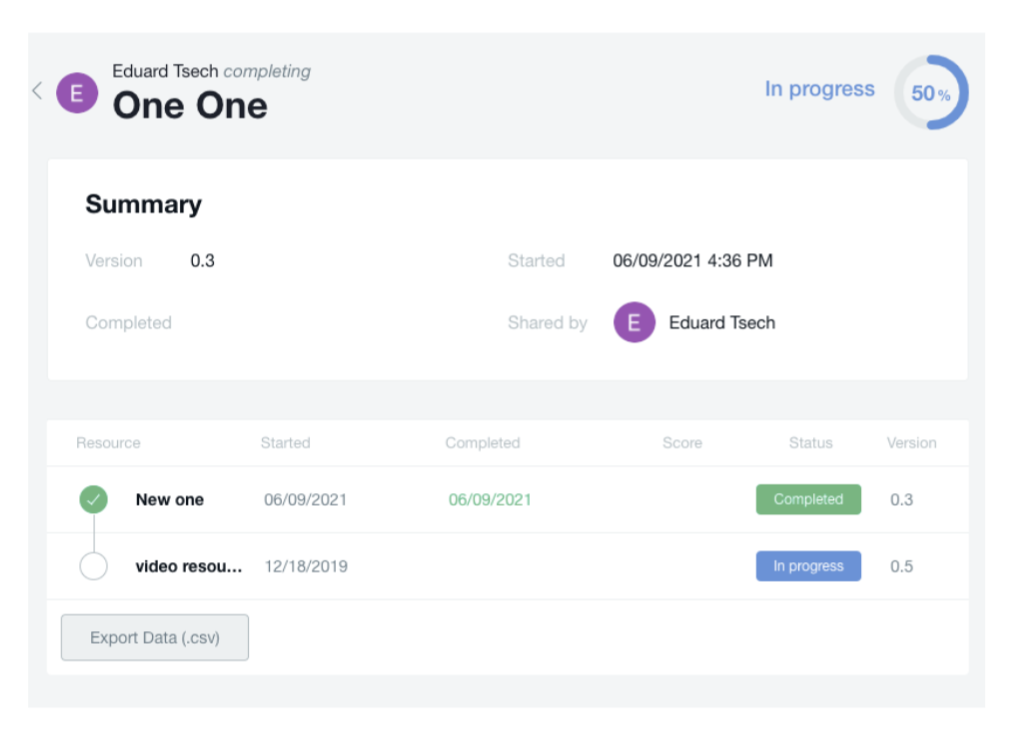 If a user fails a resource in the pathway, you can reshare it with them so they only need to redo the failed resource:

To do this, go to manage pathway, select share and ensure reset existing enrolments is switched OFF to prevent the user having to start the pathway from the beginning: 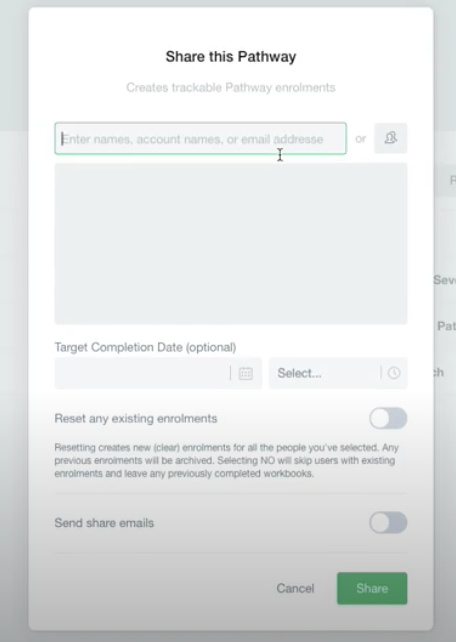 The user will then be able to see the pathway progress has updated and the failed resource is reset for them to try again:

Looop now also caters for archiving / unpublishing resources. In the example below, the 'Multipage' resource was unpublished/ returned to draft mode and therefore is no longer visible in the latest version of the pathway: 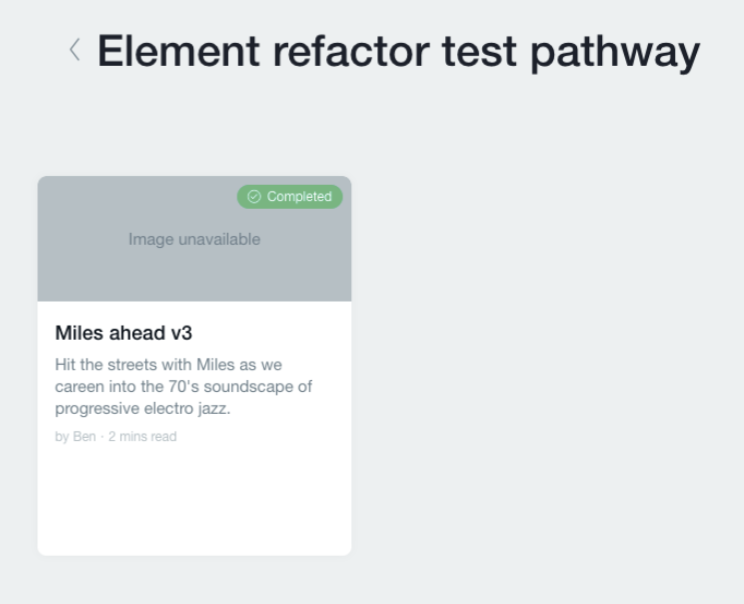 However, it is still preserved in analytics in all historical enrolments: The same happens when archiving a resource or removing it from the pathway: 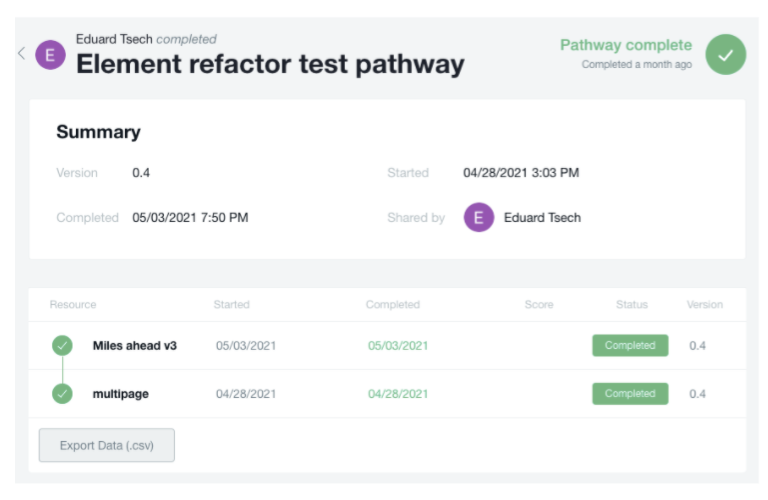 To summarise the changes listed above:

We now allow you to see older versions of your resources. To see version history, first go into your resource and you'll see the following:

Select versions to view the current version and any previous published versions. Versions are only based on past content that was published, not left in drafts.

Click on the different versions to view past published versions of the resource: 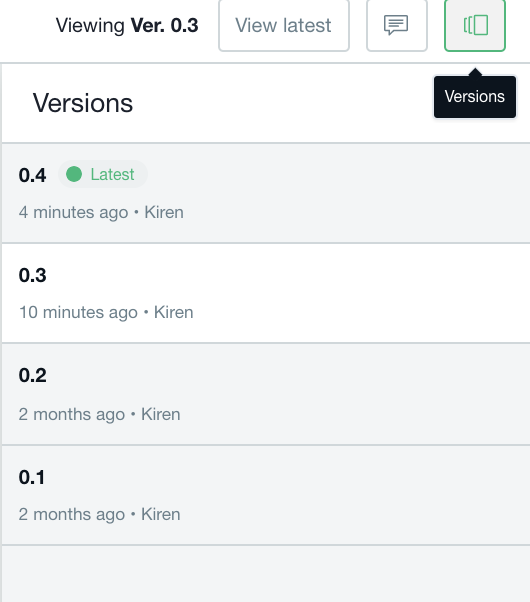 The enrolments tab in analytics will show you which version a user completed:

The resources - enrolment tab in analytics will show you the same: